The Chan Centre for the Performing Arts

Since its opening in spring 1997, the Chan Centre for the Performing Arts has earned an international reputation for its striking design and stellar acoustics. Artists, critics and patrons alike are unanimous in their praise of the multi-faceted facility, winning it a place among North America's premier performing arts venues.

Nestled amid the lush landscape on the University of British Columbia campus, the Chan's distinct, cylindrical shape has become a noted landmark. Its silver exterior is clad in pre-weathered zinc panels, complementing the building's verdant surroundings and panoramic views. A glass corona set atop the roof further enhances its reflective quality, while subtle outdoor lighting illuminates the neighbouring walkways and towering trees.

A variety of performances and events are offered year-round, from classical recitals and jazz concerts, to avant-garde theatre and opera productions, to film screenings. The Chan also presents its own series which showcases a dynamic roster of artists and musical traditions. The organization regularly partners with other Vancouver arts groups to co-present concerts by world-renowned performers.

Commissioned in the early '90s, the Chan's mandate is twofold: to meet the needs of the UBC community and to provide for local and visiting arts enthusiasts an acoustically superior, medium-sized concert hall. Thanks to the skilled design team of Bing Thom Architects, ARTEC Consultants of New York and Theatre Projects Consultants, today the Chan is one of Vancouver's prime rental locations for lively arts productions, conferences, recording projects, and film and television shoots. On the academic front, UBC music, theatre, and film students now have access to topnotch venues throughout the school year, be it for rehearsals, performances, or film screenings.

The development and construction of the Chan, started in 1995 and completed in 1997, was funded through the generous support of the Chan Foundation of Canada, BC Tel (now TELUS), and the Royal Bank Financial Group, with matching funds provided by the Government of British Columbia.

Liquor LicenseNone, All Ages or Provide your own
Rentable / Hosts Outside EventsNo 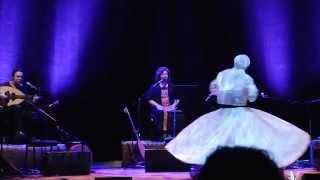 In this Video Artist(s) Vashaan Ensemble Resource(s): The Chan Centre for the Performing Arts
Posted: Jan. 22, 2016
Filmed: Feb. 15, 2014
Submit info on this Resource to our admins